I. Intro (AKA the part you’ll skip)

It’s been over a year since I posted here. I’ve thought of a few topics that I might come back around to (1990s fashion in seasons 1 -3, anyone?) but the motivation always petered away, lost somewhere in the exploding backlog of my Netflix queue. 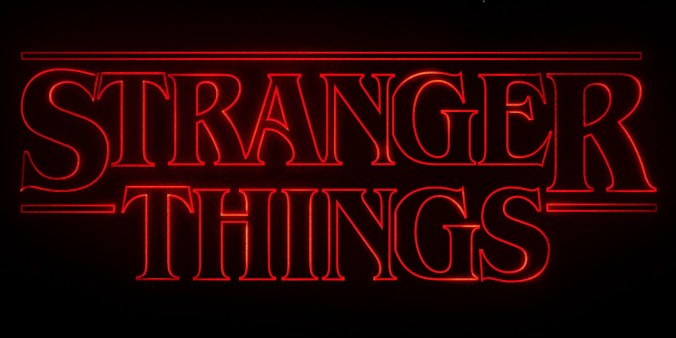 I also have a rule for myself that I won’t write a post that does nothing but complain about an episode, regardless of which episode it is. That’s how my blog ended up with a post centered around TrustNo1 that somehow managed to go 500+ words without calling it out for the out of character, canon-busting fanfic that it is.

My Struggle 3 resolved both of these issues. I was motivated to write this post, and it’s nothing but complaining about an episode. I’m sorry. If it helps, I’ll save you some time and criticize myself for it so you don’t have to (or as a baseline for you to build your insults from):

Why would anyone just read a long rant?

I’m not sure they will.

Chris Carter created a hit television show loved by millions. What have you ever done?

I have not created a hit television show loved by millions. You got me there.

Why watch a show if you hate it so much?

It is my love of X-Files that drives me to hold the show to the high standards it set for itself. I can’t imagine it would be hard to find other examples of angry, obsessed nerds, though. Comic Book Guy comes to mind. Me and him should hang out.

II. Nothing but complaining

We’ve been on the “let’s explain” train for a couple seasons already, but My Struggle 3 reached new heights of soliloquy. Now on top of all the conversational exposition (e.g., between Monica and CSM) —

— and on top of the opening musings —

We found out his name is Carl Gerhard Busch, so maybe this monologue can stay

— we can fill the space in between with key characters’ spoken thoughts, serving to translate the parts of the show that were conveyed through action and acting into statements of the obvious. Wait… Mulder is worried about Scully? This changes everything.

b. Convenience and coincidence

This is also known as lazy writing, but arguably the previous section also falls under that designation, so in the spirit of being MECE, here we go.

Fortunately, he takes a quick break to film a Ford Mustang commercial, after which the driver who was tailing him thinks to himself, “Well, shoot. I lost him. Better drive to Spartanburg right now.”

And a few other characters join in on the improbable fun. From the fact that Mulder’s half-brother has kept his estranged family in the loop about his contact information —

— to the doctor at the public hospital where intelligence agencies have been dropping off participants in their top-secret experiments, which seems reckless but whatever — — to the chance appearance of the twin banes of my existence, Miller and Einstein, who come back from their Starbucks run just in time to witness Scully’s accident and to drop her off at the hospital before disappearing into the night.

Perhaps any and/or all of these shortcuts will be explained in later episodes, at which point I am ready and willing to have my mind blown.

I’ve expressed my feelings about Miller and Einstein before. It perplexes me that someone would want to base a series on two flat characters with no chemistry, but who am I to argue with Chris Carter’s consistent new-series success.

Maybe their derivative presence has got me over-sensitive to new characters, but it sure feels like Mr. Y is a (slightly) younger Cigarette-Smoking Man who can serve as a foil for Miller and Einstein. At least, that’s all I can see when I look at him.

And really, who cares how a hardcore fan feels about the setup for a spin-off? If only hardcore fans watched the spin-offs, they’d never stay on air for more than half a season. If Fox wants to pick up a newer, younger X-Files, then I wish them happy trails. Just one request — can we treat this season as the grand finale of a classic show and not a launching pad for the direct-to-video version? 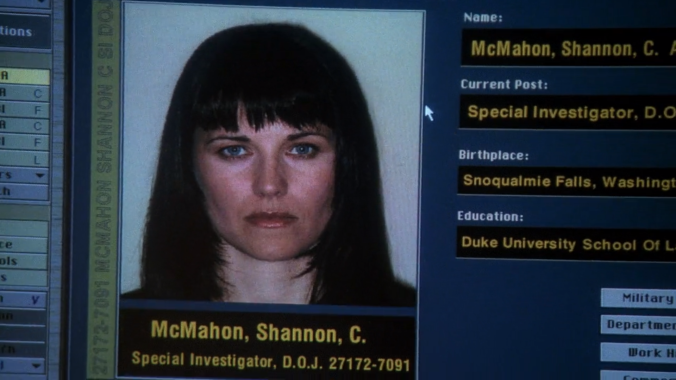 “And then the super-soldiers were weak against magnetite, but then baby William was born as a super-soldier, except actually he was a Christmas miracle, and uhhhhh”

But how in the name of Alvin Kersh are we supposed to keep track of the myth-arc when Chris Carter reaches into the past and changes it?

In the scene in question, from season 7’s “En Ami” (quoth high-school me: “WHOA it’s like ‘enemy’ but means ‘as a friend’!!!! HOLY CRAP!!”), Cigarette-Smoking Man has driven through the night to the quaint riverside cottage where he plans to share the cure for all diseases with Scully. She wakes up in a strange bed in pajamas and accuses him of drugging her.

Line: “I carried you. You’d been up for over 30 hours, you were delirious.”

Putting aside how many Cracker Barrels they’d have had to stop at to make a trip from DC to Pennsylvania last 10+ hours, it was a characteristically creepy explanation, but one that she accepts and that neither Scully nor the series ever refer to again.

Not creepy enough for Chris Carter, mind. The new version runs a little different. And in case you missed it, it’s now framed as the forced conception of William, science-child of Scully and CSM.

Line: “We carried you, my housekeeper and I. You’d been up for over 30 hours, you were delirious. You can ask her.”

Chop that together with some slo-mo reaction shots from different episodes, and a previously innocuous shot of him putting on one glove (which, granted, was followed in the original episode by him tenderly pushing her bangs out of her face), and now you’ve cranked your run-of-the-mill creepiness up to 11!

The inclusion of the housekeeper is an interesting, if non-sequitur, choice at this point, serving either to make him look more defensive and guilty, or to set up the involvement of a character we’re already familiar with.

Putting aside (for a moment) the horrific implications this change has for a character that always seems to get the short end of the stick anyway, Chris Carter is poking at a Jenga tower here. There have been stray instances of inconvenient pieces falling out of the mytharc before when overlooked or inconvenient — Mulder claiming not to be a psychologist, Scully accusing Mulder of emotionally associating the victim in I Want to Believe with his sister even though that was soooo 5 years ago — and there have even been add-ins — Scully’s IVF comes to mind.

But reaching back and changing scenes that we’ve already seen really does not inspire belief in Chris Carter’s contention that everything is part of a plan. If that was your intent with the mytharc, would you have let the series expire without hinting at it? Would you need to change dialogue to make it seem plausible?

Though if we are going to bring unused cuts from old episodes into canon, I have a few suggestions: 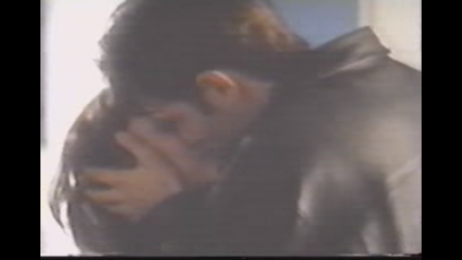 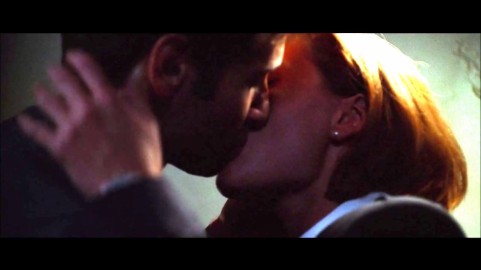 If you’re reading this blog, then you probably read other, better X-Files blogs, too. Many of them had responses to Scully’s treatment in this episode that were appropriately negative.

Before I quote a few of them, let’s recap — this is an iconic, independent female character, who during the course of the main series is abducted, made to have a baby without her consent, found in a coma, gets cancer, finds and loses a child she didn’t know she had, loses her partner to abduction, loses her partner to death for like 8 months, gives up her baby for adoption, and is subjected to all manner of capture and beatings, though the latter two are part and parcel of being a main character on an hourlong dramatic TV series for 200+ episodes. On top of that, she also lost every family member except her estranged brother and her mother. And then in the most recent season, she loses her mother.

Since her life has been so much wild and crazy fun up until this point, the first episode of this season sees her wake up in a hospital after having severe seizures, get in a car accident, and get nearly choked to death by an assassin.

Oh, and everyone’s favorite: Cigarette-Smoking Man says he impregnated her without her permission.

I shouldn’t need to explain why this is a cheap plot move, or why it’s not a great time to medically rape your strong female lead.

Even if this were the suspenseful stroke of carefully-orchestrated genius Chris Carter thinks it is, what it does is leave Scully with very little say in anything that happens to her, basically throughout her entire life, but especially so in this episode. She’s left to play a Cassandra role, trying to get Mulder to believe her prophesies while incapacitated. When she does take matters into her own hands, she’s swatted back down again by crashing her car three feet away from the FBI building.

And her visions themselves are due to her connection with her son or something. Motherhood is a powerful bond with its own well of mystery and mystique, but especially as a woman with no plans for kids myself, it pains me to see her only point of plot influence in this episode is as a conduit for her child.

Now onto the other blogs you can read for more insight:

“The objectification of women takes many forms. In Scully’s case, it’s not sexual objectification but lack of agency. Scully is an object used to literally and figuratively give birth to other plot devices. She has no control over her own body, and her decisions are made for her. ”

“If she’s evolved to be a believer in a way that we haven’t seen before, and she’s the independent woman, with non-standard, non-traditional views of what roles and life can be – why can’t her actions within the storyline also evolve to be one that satisfies that aspirational desire to find justice where there’s none, and have some rewards at it? It seems like there’s a lot of resignation when it comes as to how others see her and no real moment when she’s not a damsel in distress.”

“Of all the disgusting, stomach-turning, hurl-inducing retcon crap. You’re gonna dig into the archives, after blatantly ignoring and shedding the series canon because you couldn’t keep track of it yourself, to find a long forgotten (if admittedly underappreciated) episode buried in the doldrums that was Season 7, a season most people didn’t much watch, and bubble back up to the surface with this pile of manure? Really?”

Salome (@xmusings) in Musings of an X-Phile