It didn’t happen often, and when it did happen it was sometime just a cover, but there are, in fact, enough instances of licensed music on X-Files for me to make a list about it. Thank God, otherwise I’d have to write actual transitions and content.

I would do the same thing if I was stuck in this episode.

Why did they let Stephen King call his episode Chinga? Was there not one Spanish-speaker in all of Vancouver who could have averted this? In any case, in spoooooky Stephen King fashion, this episode features an accursèd doll who telekinetically inflicts justice on grown-ups who disrespect the little girl who owns her. “The Hokey Pokey” plays on the little girl’s toy record player as the doll forces people to stab their own faces and take hammers to their heads, in a less-effective use of the contrasting soundtrack technique in “Home” (see entry #1).
9. “Bad Boys” by Inner Circle
Episode: X-COPS (season 7)

It’s an episode of Cops starring Mulder and Scully (side note, season 7 was terrible). In keeping with this, the film quality is different, there’s bleeped out swearing, and the aforementioned Cops theme plays at the beginning. Supposedly this was a fitting way to celebrate the 150th episode of this groundbreaking sci-fi program.
Side note: I had to rewatch pieces of this episode just now to get the screen grab and found them playful and enjoyable. Is this age speaking? Is it wine? The world may never know.
8. “Joy to the World” by Three Dog Night
Episode: Detour (season 5)

Scully and Mulder fight mothmen, Richard Gere starred in Mothman Prophecies, and Mulder suggests Richard Gere play him in the movie based on the X-Files. THIS MEANS SOMETHING.

Mulder and Scully get lost in the woods while searching for a camouflage monster that may or may not kill people. That night, Scully offers to keep watch because Mulder is weak from an encounter with the monster. He asks her to sing something so he knows she’s awake, and she gives an off-pitch rendition of this song while holding him in her lap. Such squee, very romance.
7. “The Sky is Broken” by Moby
Episode: all things (season 7)

I think some other things happened in this episode but I don’t remember what.

Gillian Anderson decides Scully needs to be more like her, and so she directs this episode in which Mulder traipses off to Stonehenge while Scully discovers the spiritual connection among all things with the help of local hippie lesbians and a Buddhist temple. On occasion, to mark the points where the universe is giving Scully signals that she pauses to notice, we are treated to this song. My personal favorite is the slow-mo at the end of Mulder pushing Scully’s hair behind her ear after she falls asleep on his couch… but that’s just me.

Oh right, this happened too.

If falling through time in the Bermuda Triangle is what it took to go to a supper club like this, it would be worth it.

Mulder is looking for a boat that reappeared after disappearing into the Bermuda triangle 50 years earlier, and in the process he falls into the Bermuda Triangle. He finds himself on the same boat but during WWII, and the characters on board are all reimaginings of his present-day companions (a la Mrs. Gulch –> Witch of the West). Scully and the Lone Gunmen find the ghost ship in present day, and this song plays as they run around the boat looking for Mulder, while Mulder and alt-Scully (an American spy) run away from Germans in 1939.
I put a big ol’ question mark next to the Andrews Sisters because, while this is the most likely recording one would use to set the stage, I’ve been burned before by sound-alike covers used on X-Files soundtracks (see entry #1 again).
5. “Beyond the Sea” by Bobby Darin
Episode: Beyond the Sea (season 1)

Kind of hard to miss the usage of this song as the send-off at Scully’s father’s funeral. Even harder to miss the vision she has of his ghost singing it in the middle of an interrogation of a serial killer on death row.
4. “Come and Go with Me to that Land” by Bernice Johnson Reagon
Episode: The Unnatural (season 6) 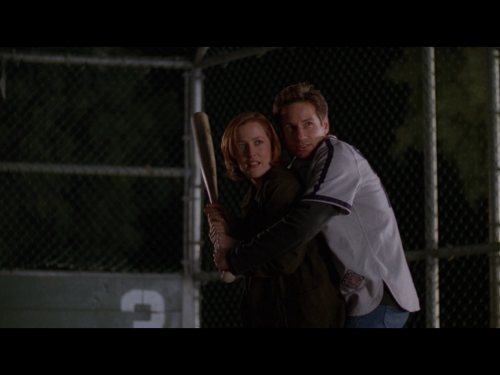 Come and go with me to that ‘ship.

The least self-aware of David Duchovny’s three directorial outings, The Unnatural explores the trials and tribulations of an alien in a black man’s body playing baseball in the segregated leagues of 1940s New Mexico. At the end <spoiler alert> our alien friend is assassinated by the Alien Bounty Hunter… but he bleeds red! Guess he became human or something! This song plays. He still dies.
3. “The Things We Do for Love” by 10cc
Episode: Rain King (season 6)

Well good, Darryl Mootz can have heart-shaped ice in the cold pack he puts on the stump where his leg used to be.

This episode also featured “Rainy Days and Mondays” by the Carpenters — because let’s be literal — but the 10cc song greets us at the class reunion prom at the end of the episode, where a man whose unrequited love for his former classmate (Victoria Jackson) was so passionate that his heartbreak brought the rain finally gets the girl. As a bonus tease, we get a cutaway from Mulder and Scully dancing, to a little more plot progression, and back to a shot of a red-head and a tall brown-haired man kissing. HA HA, ‘shippers, IT’S NOT THEM.
2. “Walking in Memphis” by Cher
Episode: Post-Modern Prometheus (season 5)

I’m starting to realize that if you just look at the pictures I use from these episodes, you’d think this series was one giant love story. Well, it is.

This episode may or may not actually have been a comic book (the ending is ambiguous), but throughout, we’re in a town that’s being threatened by a monster, who turns out to be the kind-hearted but misunderstood result of a genetic experiment by his scientist father… gone awry! The monster (Mutato) is really into Cher, and the episode ends with Mulder and Scully taking him to a Cher concert, where she (a.k.a. the back of her head) sings this song.
1. “Wonderful, Wonderful” by Johnny Mathis but not really
Episode: Home (season 4) 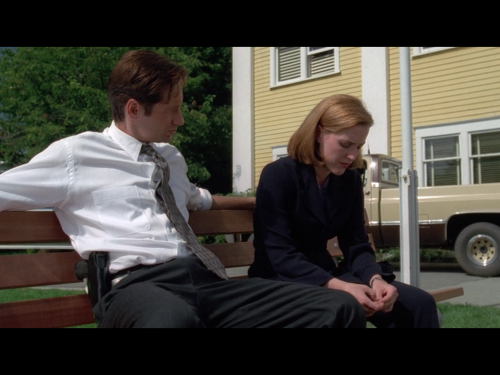 This lovely song is played every time the murderous inbred protagonists get into their antique car. Therefore we get to hear it during such gems as the time they beat a man and his wife to death with a baseball bat, or when the quadruple-amputee mother gets into the trunk of said car with her lover/son to have sex.
Wikipedia tells me that Johnny Mathis read the script and wouldn’t allow his song to be used in the episode, so they had a sound-alike record it. What is it about this wonderful, wonderful episode that he could have found offensive?

For those of us who choose to plug our ears and squeeze our eyes shut when there are spoilers about, there is still plenty of speculation fodder to feed on in the series of trailers that have been released over the past few weeks. One of those trailers included the image below —

— which elicited the following measured response from fans on Twitter.

As background for people who gave up on X-Files/life after season 5, apparently Mulder’s prior exposure to the black oil mixed with alien characters carved on a stone to yield terminal brain disease of some unexplained type.

To be clear, I too experienced twinges of PTSD when I saw Mulder grabbing his head and staring off into the distance as though he’s hearing alien voices AGAIN even though he already had his slate wiped clean when he came back from the dead. 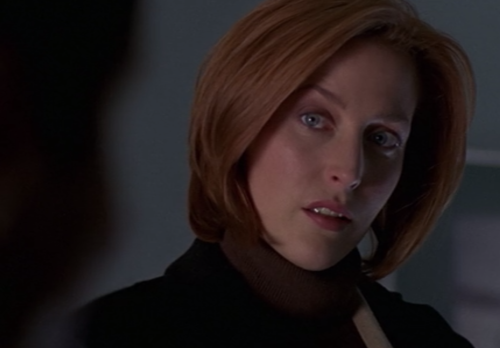 However, in the world of X-Files, it would work in Mulder’s favor to have a relapse of his brain disease. Didn’t you know that sabotaging the intricate functions of your brain gives you superpowers?

The crappy part about having an inoperable brain tumor is its effect on your life expectancy. The great part, though, is being able to push your will onto others by talking to them. Seeing as oncologists don’t have to wear foil hats to work every day, this is probably just some fluke occurrence brought on by Robert Patrick Modell’s obsession with the ronin lifestyle and oh wait just kidding, his sister has one too.

Though her psychic paper leaves something to be desired.

“Let’s take communion FROM MY SKULL.”

22 years in prison taught the Reverend Orison little about patience, since he can’t be bothered to wait for a power-bestowing tumor and instead has a hole drilled in his head to unlock his psychic influence.

Blood flow to his brain is three times that of normal people, which is all it takes for one to trick a roomful of people into letting an escalating death fetishist walk out of prison. And there’s your answer for why we have separation of church and state.

Side note: I’m picturing an elite military squad made up of Vietnam vets with superpowers. Augustus Cole and Nathaniel Teager are definitely in. The A Team can provide backup.

Additional side note: this picture from the next episode. Now that I post this, I see there’s more information in this particular still than usual. Maybe I should take it down.

No, of course a lobotomy didn’t give him the ability to imprint the future onto undeveloped film. That would be ridiculous. He can do that because was in an insane asylum.

Additional side note: the series could have continued even if Scully had been lobotomized here and not saved at the last minute. The back-and-forth repartee would have just been different.

Mulder: Did you finish the autopsy? What was the cause of death?

5. Fox Mulder (The entire series, you should know who this is)

Let’s never do this again.

Seeing as Agent Mulder falls into one of these five categories, he’s likely to find some unexpected upsides to his terminal illness, if indeed Chris Carter does decide to wheel out that old trope again. But lest we think we have the X-Files universe completely figured out, we should note that there are exceptions to the rule.

“Do I get superpowers too?”

Christian has Sandhoff disease, and apparently there is a negative correlation between how explainable your brain disease is and how many superpowers you get because he gets none. Unless you count the superpower of living in a hospital for weeks on end. Or the superpower of having Scully practice her stem cell therapy skills on your exposed dura mater after a rigorous Google training course. 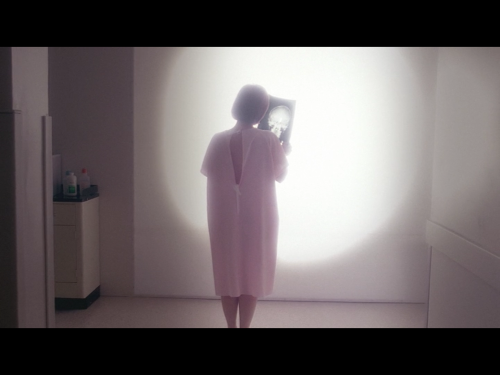 There’s no happy story that begins with you holding an x-ray of your own skull.

I guess it makes sense. After all, Mulder’s got a lot going on, and he deserves a break. Scully has had almost a couple dozen episodes to deal with the loss of her father and sister, so she’s due. In fact, maybe she should lose a daughter in a few episodes, just to keep things even.

At least she can’t die.

#ScullyFIF. Also cram it with your naysaying, Darin Morgan, you’re not the boss of my wild speculation.