I won’t do a full run-down of the episode, though it was pants-peeingly exciting to see the original credits on live TV again. There are already plenty of reviews online, ranging from mainstream critics who drowned in Chris Carter’s exposition-filled monologues to thrilled fans who have learned to swim in such waters.

I want to talk about one moment that pulled the whole episode together for me. It’s when Mulder the Disheveled Hobo lays out his unified theory of everything for Tad, Sveta and Scully.

The mark of a good theory is when you can’t mumble through all of it without stopping to breathe.

This one goes a little above and beyond, however. To wit, here are the collected works of the new Corporate Conspiracy, according to Mulder and Tad O’Malley:

I, for one, look forward to the uphill battle the government will have in trying to get my data back from Google.

At first glance, this is a rant worthy of that guy on the subway with mismatched shoes and an open 12-pack of fruit gummies. But really there’s two ways to look at this. One viewpoint is that this conspiracy salad is the only way one could hope to unite X-Files’ sprawling mytharc. “Remember when it was just me you had to deal with? Kids could walk to school, movies cost a nickel…”

Or — and this is why I liked the scene — Mulder has fallen off the deep end. There’s three reasons why this is cool.

I don’t know what to believe anymore. Next I suppose you’ll be telling me the truth isn’t out there.

You’d think that the skeptic scientist would be the one keeping us grounded, but Scully has two things working against her, neither of which are her fault. One is her inconvenient habit of being absent or semi-conscious when proof of the paranormal is nearby. The other is that Mulder’s gravity-defying leaps of logic almost always turn out to be accurate.

Once the two settled into their comfortable repartee, what that meant for the viewer was that when Mulder is telling Skinner or a roomful of FBI agents that their suspect is a liver-eating mutant or a shapeshifter, the empathetic embarrassment is lightened somewhat. Sure, he looks ridiculous now, but he’ll have the last laugh.

With this last break, we no longer have that comfort. Now he’s just your uncle at Thanksgiving.

“I’m just saying, what kind of country is this where we don’t take care of our veterans but we’ve got illegal aliens crashing their UFOs into our Roswell? Thanks Obama.”

2. It fits his continued degradation from the second movie.

“I’m just fine. You’re the one who needs to go outside and stop throwing pencils into the ceiling.”

As I’ve discussed before, Mulder was not in good shape in X-Files: I Want to Believe. The X-Files closed, prompting Scully to go be a productive member of society and Mulder to hole up in a den, making a nest for himself out of newspaper clippings as though there were no irony in that.

In this new episode, we see that Scully has finally pulled the plug on this relationship, and we even get a bonus diagnosis — endogenous depression. Which I had to look up.

Perhaps Wikipedia is leading me astray, but I do take issue with this diagnosis. Apparently endogenous depression is brought on by chemical imbalances in the brain and is congenital, as opposed to being triggered by major life events. It wouldn’t surprise me the least if among the mysterious brain diseases that Mulder has faced, a predisposition to depression popped up. But I’d also argue that anyone who went from having a mission and a career to becoming a professional beard-grower for 14 years is courting a mental health issue or two.

3. It invites nostalgic recollections of other times he was crazy. 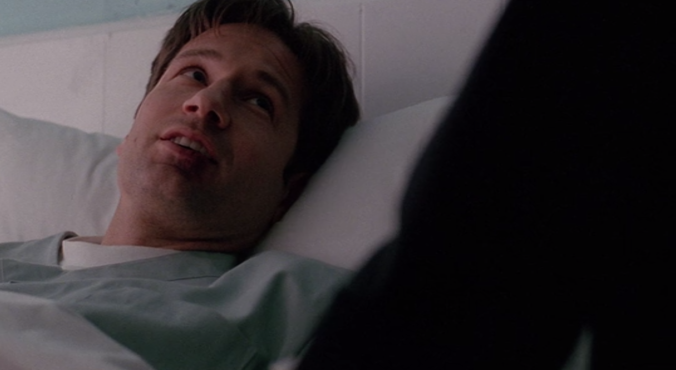 “Five years together, Scully. You must’ve seen this coming.”

I have zero nostalgia for this arc. Why did I even include this picture? Why am I still typing?

By now, you may have seen the below hints about the resolution of one of many X-Files mysteries, as covered by outlets more mainstream than expected. The press junket has gone into full force this week, so it’s not weird that they’re talking about X-Files (which hereby and temporarily makes it not weird that I’m talking about X-Files). The weird part is that of all the theories one could address and publicize addressing, this one is pretty far out there on the obscurity list.

“And stay tuned for episode 5 of #TheXFiles when Chris Carter reveals the continuation of the fluke monster storyline from the season 10 comics series! The whole world is on tenterhooks!”

So just in case you’re a fan but have no idea what the hell Chris Carter is referring to, allow me to sum it up shortly. This includes my understanding of the cause, but — again — there are other theories. There are always other theories.

Surely you’ve seen this man in line at a CVS somewhere.

None other than Clyde Bruckman, from the classic episode Clyde Bruckman’s Final Repose. If you haven’t seen this episode, I demand that you stop reading and go watch it. It will ruin you for other television shows.

Clyde Bruckman can foresee people’s deaths and does so on multiple occasions throughout the episode, leading to such zany hijinks as Mulder stepping in banana creme pie and Scully acquiring a Pomeranian. Toward the end of the episode, while awaiting the final confrontation with the antagonist, Scully finally bites the bullet and asks:

Pretty straight forward. As I’ve pointed out before, writer and creative genius Darin Morgan thinks viewers have blown this way out of proportion and that it absolutely does not mean that Scully is immortal. I’m just saying, Clyde Bruckman has a pretty good track record.

Darin Morgan shown here, regretting his decision to use symbolism.

Cause: An immortal crime photographer stole her death. Scully works a case with The Guy from Two Guys, a Girl and a Pizza Place But Not That One You’re Thinking of Ryan Reynolds in search of a photographer who is usually the first one on the scene to get shots of a dead body, even when the police haven’t been called yet.

As you might expect, he was supposed to die of yellow fever at a young age but instead turned away from Death and let Death take his nurse. Since that moment, he has lived 100+ years and has spent the last few decades trying either to kill himself or to capture the arrival of Death in a photograph and then look into its eyes.

Fellig knows when someone is about to die, giving him a power that somehow makes him the Debbie Downer version of Clyde Bruckman. He senses that it’s Scully’s time to go —

Maybe Clyde Bruckman was wrong and Scully is about to die in the middle of season 6. That seems likely.

— and then a little misunderstanding with Not Ryan Reynolds’ gun seals the deal.

Fellig recovers nicely from his gunshot wound to the stomach and reaches for a little point-and-click to catch Scully’s death. Just then, she spots Death with her own eyes.

She sees him; we don’t. Otherwise we’d be dead. Keep up, people.

Fellig, sensing his opportunity, tells her to look away. He then proceeds to look Death square in the face and keel over dead.

So what are we left with? Trusty, dependable Clyde Bruckman has said Scully will never die, and then her meeting with Death was stolen by an immortal photographer. Therefore, Scully is immortal.

For the sake of completeness, I’ve listed a few more pieces of evidence below from the X-Files wiki.

And now we are all up to speed.

For those of you keeping up with the #TheXFiles201days daily rewatch, you’re now slogging through season 9, and I apologize. Though I do stand by Teenage Me’s conclusion that if you look past the William and Super Soldier episodes, you are left with a solid collections of MOTWs.

Yesterday’s episode was TrustNo1, in which Mulder and Scully have prearranged for Mulder’s return because of precisely forecasted loneliness, which they discuss in super-secret emails.

On public internet? And a Hotmail account? And using your password as your email alias? HAVE YOU LEARNED BUT NOTHING.

And while it is taking all of my albeit limited restraint to keep from diverging into a post about everything wrong with TrustNo1, the biggest shock for many re-watchers was the revelation shared by the Shadow Man. 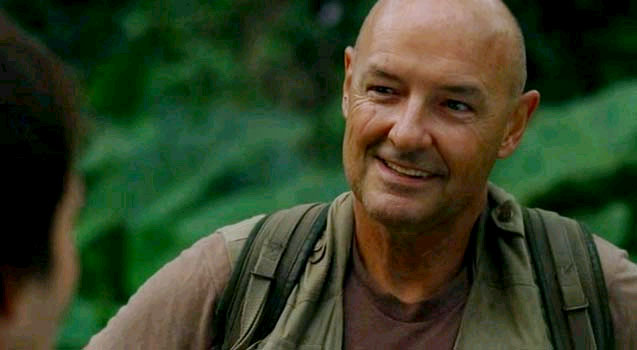 After blowing up her car for secrecy (Editor’s note: There are better ways.), he lists off an assortment of deeply personal tidbits about Scully, up to and including a tryst with Mulder. 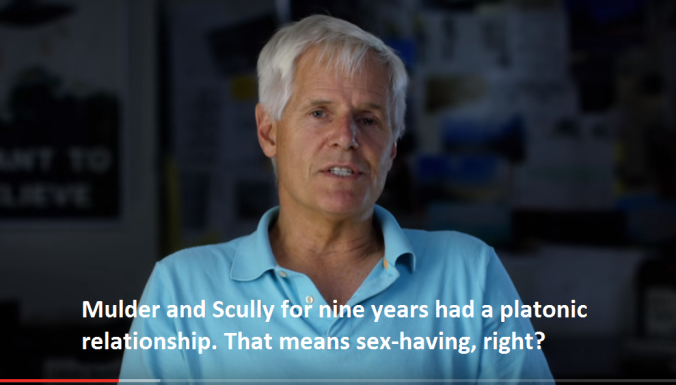 Shadow Man declines to share where his authorization comes from, but in many ways this was post-9/11 X-Files’ first dig at the Big Brother intelligence collecting that we were moving toward at the time. Disgusting, isn’t it? To think that all of her private moments from childhood onward were never really private at all. That this random bald guy with more than a passing resemblance to SAC Darius Michaud —

Haven’t we watched Scully when we she thinks she’s alone, whether that’s bathing her dog or having a date with a tattooed mystery man? Even worse, haven’t we seen danger coming from over her shoulder in the form of shape-shifting aliens and subliminal VHS messages and failed to warn her? Haven’t we seen her hold back from sharing her feelings and known what they were regardless? And then judged her for hiding them?

But we can’t be just as bad as Shadow Man. Fortunately for us, Scully is fictional and we don’t share a plane of existence. Or so I thought, until the first minute of the #XFilesRevival episode was released today.

Admittedly I melted into a puddle of goo upon hearing David Duchovny’s voice, but after I reconstituted myself, I noticed something about the stack of pictures we’re flipping through. It’s possible to ID the episode for each picture, from the rain-drenched Mulder and Scully in the pilot — — to their 8th season hug, standing a little closer this time. Why are these pictures so immediately familiar? Possibly because they’re exact screenshots from those episodes. Pictures taken from where we were standing. Everyone say it with me…