By now, you may have seen the below hints about the resolution of one of many X-Files mysteries, as covered by outlets more mainstream than expected. The press junket has gone into full force this week, so it’s not weird that they’re talking about X-Files (which hereby and temporarily makes it not weird that I’m talking about X-Files). The weird part is that of all the theories one could address and publicize addressing, this one is pretty far out there on the obscurity list.

“And stay tuned for episode 5 of #TheXFiles when Chris Carter reveals the continuation of the fluke monster storyline from the season 10 comics series! The whole world is on tenterhooks!”

So just in case you’re a fan but have no idea what the hell Chris Carter is referring to, allow me to sum it up shortly. This includes my understanding of the cause, but — again — there are other theories. There are always other theories. 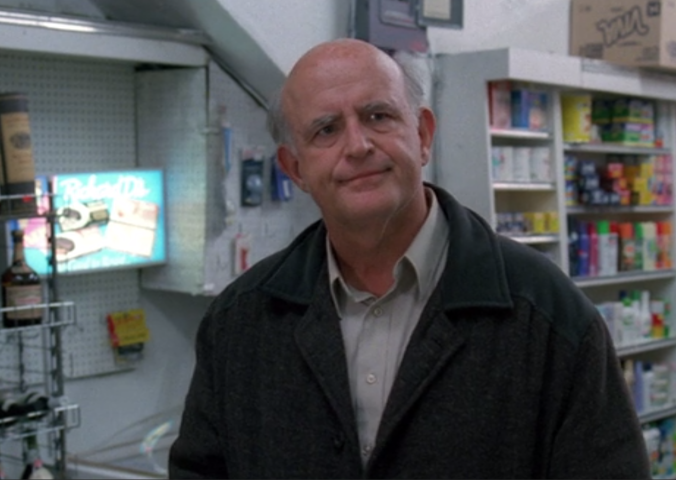 Surely you’ve seen this man in line at a CVS somewhere.

None other than Clyde Bruckman, from the classic episode Clyde Bruckman’s Final Repose. If you haven’t seen this episode, I demand that you stop reading and go watch it. It will ruin you for other television shows.

Clyde Bruckman can foresee people’s deaths and does so on multiple occasions throughout the episode, leading to such zany hijinks as Mulder stepping in banana creme pie and Scully acquiring a Pomeranian. Toward the end of the episode, while awaiting the final confrontation with the antagonist, Scully finally bites the bullet and asks:

Pretty straight forward. As I’ve pointed out before, writer and creative genius Darin Morgan thinks viewers have blown this way out of proportion and that it absolutely does not mean that Scully is immortal. I’m just saying, Clyde Bruckman has a pretty good track record.

Darin Morgan shown here, regretting his decision to use symbolism.

Cause: An immortal crime photographer stole her death.

Scully works a case with The Guy from Two Guys, a Girl and a Pizza Place But Not That One You’re Thinking of Ryan Reynolds in search of a photographer who is usually the first one on the scene to get shots of a dead body, even when the police haven’t been called yet.

As you might expect, he was supposed to die of yellow fever at a young age but instead turned away from Death and let Death take his nurse. Since that moment, he has lived 100+ years and has spent the last few decades trying either to kill himself or to capture the arrival of Death in a photograph and then look into its eyes.

Fellig knows when someone is about to die, giving him a power that somehow makes him the Debbie Downer version of Clyde Bruckman. He senses that it’s Scully’s time to go —

Maybe Clyde Bruckman was wrong and Scully is about to die in the middle of season 6. That seems likely.

— and then a little misunderstanding with Not Ryan Reynolds’ gun seals the deal.

Fellig recovers nicely from his gunshot wound to the stomach and reaches for a little point-and-click to catch Scully’s death. Just then, she spots Death with her own eyes.

She sees him; we don’t. Otherwise we’d be dead. Keep up, people.

Fellig, sensing his opportunity, tells her to look away. He then proceeds to look Death square in the face and keel over dead.

So what are we left with? Trusty, dependable Clyde Bruckman has said Scully will never die, and then her meeting with Death was stolen by an immortal photographer. Therefore, Scully is immortal.

For the sake of completeness, I’ve listed a few more pieces of evidence below from the X-Files wiki.

And now we are all up to speed.